If your face is sore from smiling when you walk out of the theatre, it’s a sure sign you have seen a good show. I am lucky enough to have caught Dave and the Plushies at The Butterfly Club in his “On the Road to 2nd” show:  a bunch of his songs from his first album (1st) and a few from his second. Dave, and his band, the Plushies- a cute collection of nostalgic stuffed toys- make real talk romantic, with songs about love, dreams, pick-up lines and Lord of the Rings. 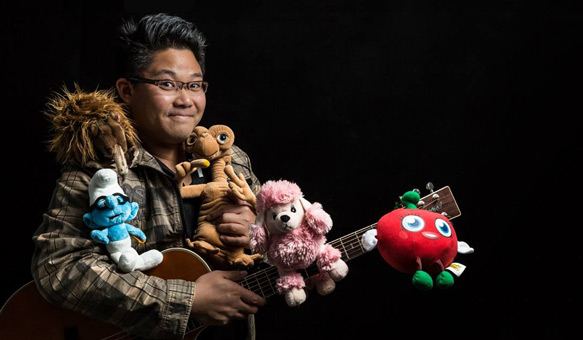 Opening with a comical and well-produced music video projected on the back screen – the saga of “Superhero Asian” – I am caught up at once in the clever lyrics and smart storytelling. Dave emerges “(W)apping in slow motion” and immediately puts the audience at ease by connecting with them through his catchy chorus and relaxed command of the stage. Dave introduces his band, the Plushies, which don’t really serve any purpose except making the stage look good. Any band that makes a singer look good without doing anything is a great thing: not that Dave needs it.

This man’s imagination for song concepts is as grand and admirable as his vocal range. The audience is quickly tapping their toes, making monkey noises, and sighing through each song. His guitar-playing and musicality makes perfect accompaniment for this intimate evening, I loved how his audience banter was the right amount of witty and quick and the audience loved it too, participating at the right times and one even yelled out to him, “All your friends are here!”

It’s easy for a show of this genre- one man singing funny songs and playing his guitar- to get monotonous. Dave breaks it up with an animated video clip, this time a love story. Just when I think my ‘warm and fuzzy tank ‘ is full, it’s topped up with light and honesty from the heart. The energy in the room is evident, raised by moments of physical comedy and more songs with choruses that get stuck in your head. Finishing with an energetic dance number “I Wanna Dance with You, Davey”, the audience and I need no prompting to burst into applause and begs for an encore.

When a second season is announced, wait no longer and get to this show. It’s clever, honest, romantic and fun for all ages. With skillful playing, a delightful voice and vocal range, and great comic timing, it’s fair to say talent wise; Dave is a Royal Plush.

Dave & The Plushies: On The Road to 2nd was performed Tuesday 28th of June – Sunday 3rd of July, 2016 at The Butterfly Club. For more information: https://www.facebook.com/daveandtheplushies/?fref=nf