A superb production of this very funny musical

The 25th Annual Putnam County Spelling Bee sounds, on paper, like a very interesting concept for a musical. However, with an original and at times beautiful score by William Finn, hilarious dialogue (some written by Rachael Sheinkin and some improvised by each new cast), and the inclusion of four audience participants as extra spellers, Spelling Bee is one of the funniest, most creative musicals to come out in the 2000s. This production, performed by Vic Theatre Company, is no exception. 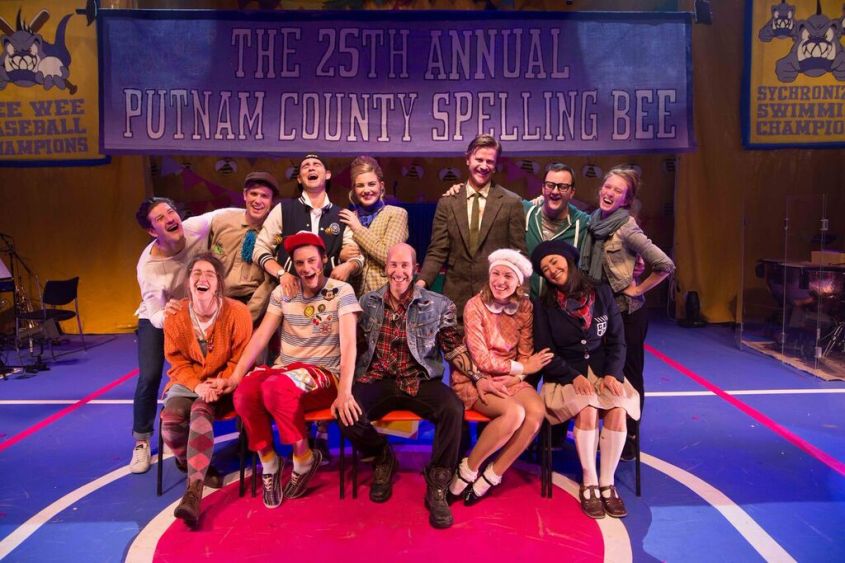 The story centres on a group of six children (played by adults), the man and woman running the bee, and the comfort counsellor, all of who are dramatically affected by one day at the ‘Bee’.

In this production, the sound designed by Marcello Lo Ricco is excellent, with the band well-balanced and never overpowering the singers. Once or twice a solo line was unable to be heard over the ensemble, however; never at a critical point. Lighting by Jason Bovaird was well-designed, with the dialogue happening under stark lights reminiscent of the gymnasium setting, and the lighting during the songs more ‘stagey’, with spots and bright colours, often to great emotional and dramatic effect.

Rebecca Moore as Rona Lisa Perretti is placed and poised with a beautiful ‘legit’ soprano voice that suits the role perfectly, although is perhaps a little young for the role.  David Spencer plays a less exaggerated Panch.  Mahoney (Matt Heyward) was vocally well-suited for the role, although his character came across as perhaps a little too ‘mellow’ and understated.

The Spellers are where the show really shines. It was refreshing to see now well-worn characters played in different ways than the usual. Chip (James Coley) executed his ‘jock’ role perfectly. Olive’s character (Caitlin Mathieson) was played as ‘realistic’ and mature. Although a convincing and heartfelt performance, it left a couple of her usually ‘funny’ lines falling flat.  Sage Douglas as Logaine and Henry Brett as Leaf both managed to find subtleties and levels in characters that are often played ‘over-the-top’. They were both adorable, and Teresa Duddy (Marcy) also executed her role well. Special mention to Riley Nottingham as the Janitor, who managed to be hilarious without a single line of dialogue.

Direction, by Ben Giraud, is clever. He makes innovative use of the space, and it was nice to see the more movable chairs instead of the static bleachers commonly used.

Musical direction, by Trevor Jones, is excellent. It was very fitting to see the talented musicians in the band aptly dressed in school uniform and reacting to the action on stage.  Vocal harmonies were perfectly balanced and executed. Choreography by Bernie Bernard is also extremely creative and unique, matching the moment perfectly.

Costumes, by Zoe Felice, are well-suited and strike just the right balance between outlandish and everyday. Meanwhile the set by William Bobbie Stewart is highly creative, with yellow tarps lining the walls, paper cut-out bees and banners hanging down, and the floor painted as a gymnasium floor.

Overall, Vic Theatre Company’s production of The 25th Annual Putnam County Spelling Bee is excellent, both side-splittingly funny and heart-wrenchingly beautiful, and well worth checking out whether you’ve never heard of it, or you’re a well-worn veteran, like myself. You won’t be disappointed.