Sleek and sensual circus for Midsumma

After Dark Theatre’s Uncovered would have to be one of the sexiest circus shows I have ever seen, and with its overt intent to explore homosexuality, love and sex, this isn’t surprising. Director and performer Dave Coombs has brought together recent graduates or current students of the National Institute of Circus Arts, and through a number of circus acts, explores the idea of “the first”, including the first encounter with a man and the first kiss. 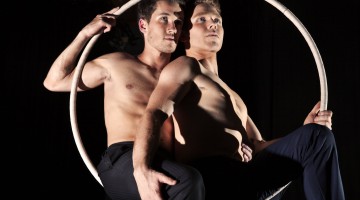 The performers – Emily Gare, Alex Jeans, Mark Graham, Nelson Smyles and Coombs – are all committed and enthusiastic and for where they currently stand in their experience, deliver some impressive feats. Jeans’ silks routine and his subsequent double aerial hoop act with Graham are strong highlights of the evening. The latter in particular successfully displayed their talents with their seamlessly moving bodies, and paired with the music, permitted the audience to recall their own sensual experiences while appreciating what was occurring on stage. Smyles’ short but sweet clown act, with his attempts to be the object of someone’s desire, is also a firm favourite. It is very simple routine but it relies heavily on Smyles’ ability to convey vulnerability and hopefulness through nothing but facial expressions and body language.

The music selection is well chosen, with a variety of songs from different genres often reimagined into new forms, giving a fresh feel to many of the acts performed. The direction of the performers is also an accomplished effort, ensuring that the whole space is used effectively and, just like the theme of the show itself, exploring every dark corner and space.

While Uncovered works on exploring these “first times” as individual stories, in order to elicit a deeper and emotional response from the audience, I felt stronger focus on character and an overall story is required. In the beginning, Smyles enters the bar and upon being questioned about his sexuality, states he is straight. One lap dance later, he has now realised he is gay and although this revelation could have been a wealth of inspiration, it is never really visited again.

Uncovered has a lot it wants to share with the audience about being a gay male. While this is a good start, I still felt it needs to build a stronger connection with the characters and what it is being explored. It’s got the talent and it’s got the vision: with a little bit more work, it can find its heart.

Uncovered was performed 27 – 30 January at Gasworks Arts Park as part of the 2016 Midsumma Festival.