There seemed to be something irresistible and intriguing about the combination of improvisation and Shakespeare; it sounded like a performance that would be too good to miss. 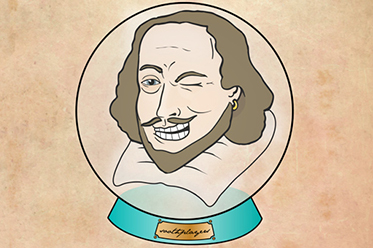 Working off a title only (in this case it was ‘The Swift Exit’) the Soothplayers put together a romantic comedy that the Bard himself would have been pleased with. There was the typical prologue setting the stage for hidden identity, war and love, along with a moral warning to those whose pegging of linen on the line is lacking in skill. What proceeded to unfold was an amalgamation of some of Shakespeare’s famous plot devices, resulting in something very familiar but still completely original. The cast of characters consisted of a beautiful female trapped by her gender, her devoted nurse, a man in love, a man wanting marriage for financial gain and the beautiful maiden’s father – a greedy Duke whose taxes on everything possible drives the Venetian people to retaliate by putting on a play. It should be of no surprise to those familiar with Shakespearean comedies that all ends well and love triumphs in the end.

Plot devices aside, this production drips of everything Shakespearean; there is metaphor, simile and double entendre aplenty. Each player’s cadence captured the rhythm and language of Shakespeare, to such an extent that there were very few anachronisms. The lighting and music courtesy of the electric lute were also both completely improvised and complimented the mood being created on stage. It was exceedingly clear from the beginning that the members of Soothplayers thoroughly enjoy performing and this was one of the most consistently funny and entertaining improvised performances that I have seen. There was not a dull moment and the cast seemed just as entertained by the creation of the story as the audience members.

Completely Improvised Shakespeare is an indulgent Shakespeare experience with lots of wit and charm, and one that I plan on making many return visits to.