Cabaret provocateur Yana Alana, the alter-ego of performer Sarah Ward, emerged from behind a scrim after her opening number, fully clothed – which she noted was a rarity after touring her critically acclaimed show Between the Cracks for the last three years, where she appeared completely nude. Here she was for the 2015 Melbourne Fringe Festival cheekily taking her show title Covered in both the literal and figurative sense, with no nudity as she only sang the songs of other artists, backed up by the multi-talented members of her band The Piranas, Louise Goh and Bec Matthews. 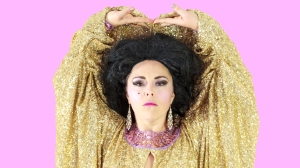 Even when singing the words of others, Yana Alana remains a fiercely individualistic and ruthlessly entertaining performer, bringing her unique interpretations to the works of Tom Waits, James Shelton, Puccini and even Beyonce, her incredible voice scaling from a Bassey-sized belt to an operatic soprano. From trying (and spectacularly failing) to achieve complicated dance moves to running screaming offstage from one end of the venue to the other, Alana is utterly and wonderfully shameless in her pursuit to entertain.

If anything, Covered is light on Alana’s usual repertoire of political and cultural satire and self-loathing narcissism, choosing instead to use the out-of-context lyrics from various songs as segues between sections. This can feel a little toothless compared to the usual ferocity of her work, but the level of artistry and craft present means she is, as always, completely compelling and absolutely unmissable.