It begins with a single touch…

Having seen Plunge when it was in its early stages of development last year during La Mama’s Explorations season (then known as Blending), I was very interested to see how the work had progressed. Being performed at the 2015 Melbourne Fringe, the work explores the infinite number of outcomes that can result from a single touch. Some are good and some are bad and some are absolutely crushing. 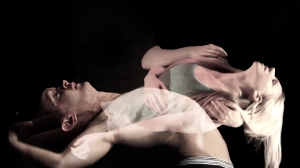 Choreographer and director Darren Vizer continues to push his two performers, dancer Joel Fenton and actor Jean Goodwin, to their extremes relentlessly. They share a good chemistry and have clearly worked hard at driving through the more challenging moments of Plunge and allowing the piece to evolve.

Fenton’s dance sequences clearly demonstrate how his body has been taken over by his emotional state and he uses the whole space to bound, leap, and throw himself around the stage. The music and sounds used to further convey these feelings are well chosen, especially the rapid beating of the heart in the second story.

Goodwin’s monologue on loving and owning her body is a powerful statement about the constant threat women face just for being women. Her command of the statements she makes and the pace with which they are delivered are full of angry confidence. She wants to be heard and she wants to make sure we hear her. It’s a speech that should resonate with each and every single woman out there as well as to every single man who has female family members, friends or partners.

What drew me to Plunge initially was the challenge of having a performer, who is predominately a dancer, acting – and vice versa. This idea has been further developed, especially with providing Goodwin a solo dance moment. However, while her commitment to the piece is evident, I ultimately had difficulty understanding the purpose of what was trying to be conveyed by this inclusion. Similarly, I would have liked to see Fenton be slightly more aggressive in the final story to really drive home Goodwin’s response.

Plunge took on its new name as the performers were no longer blending their two art forms but immersing themselves in it. Similarly, one could also say that it’s about what happens when we take the plunge into romance without quite knowing what the outcome will be. Despite its minor shortcomings, this is still a highly intelligent and insightful piece not only exploring relationships, but also the way the society in which we live operates.