This month, a Tony, Grammy and Oscar-winning classic is being presented to much awaiting Australian audiences for the first time by Stageart. Dreamgirls is the timeless story of an all-girl singing group with dreams to make it big – to sing their way to the top and be important. When car salesmen and all-round business enthusiast Curtis Taylor Jr (Winston Hillyer) meets The Dreamettes, things begin to change and fame starts to become a difficult reality. 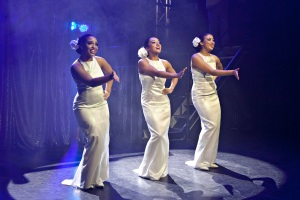 Directed by Terence O’Connell, musically directed by Tyson Legg and choreographed by Darren Stack, this production plays host to a myriad of Australian talent and style. The opening night audience, filled with Melbourne’s theatre-scene elite and a celebrity or two, waited anxiously for the toe-tapping extravaganza and the cast didn’t leave anything behind.

The simplicity of the set designed by Jacob Battista was refreshing; it allowed the performers to be the focus of your attention at every moment. The simple levelled scaffolding construction gave the actors room to move and creative freedom for the little things, like exits and entrances.

Expectations on costumes for a glamorous production like Dreamgirls were high and the sparkling vision was definitely evident. The execution however was a little off with a few ill-fitting garments that stole your eye away. On the other hand, the costume team led by designed Daniel Harvey does deserve major kudos for the quantity alone, with a new outfit appearing after almost every stage exit and for the quick change moments that thrilled and dazzled.

The cast was superb. Effie White is a notoriously difficult character to handle with her bossy demeanour, diva-like presence and huge vocal range; Thando Sikwila blew the audience away and received a standing ovation to prove it.

Other notable peformances were Anna Francesca Armenia as Deena Jones, Zenya Carmelloti as Lorrell Robinson and Hillyer as Curtis Taylor Jr. But perhaps the crowd favourite, and rightly so, was Gareth Jacobs as the soulful Jimmy ‘Thunder’ Early. Jacobs was energetic, hilarious and insanely talented in more ways than one. He gave Jimmy all the sass and flair he deserves and so much more; Jimmy got soul!