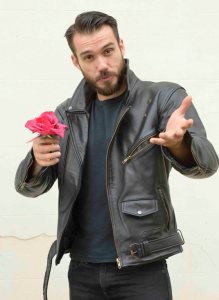 SuperScene is competitive improvisation where five directors each construct a unique story and the audience holds the power to vote off a director at a time, until there is only one left standing for the Super Scene. It didn’t appear as thought the stories always went in the direction that the director had originally intended, with a few of the performers throwing in their own interpretative responses to where the scenes were headed. Needless to say, we were treated to five very unique stories.

Among the storylines that didn’t make the cut were the Victorian Era succubus/Inspector Doris mystery and the 60’s artistic beatnik drama. I really wanted to see what happened to the 60’s artist played by Sarah, partly because the storyline was great but also because Sarah’s performance was incredible. I struggled with not knowing how all the stories ended, but in the world of competitive improvisation only one director gets the prize. The Super Scene was the conclusion to the epic World War II German Blimp catastrophe in Utah. This story had everything from storms, to accents, to an accidental bombing of small town America.

The second half of the show was dedicated to Smells Like a Song, an improvised musical where the audience again had the power to decide not only when the songs would happen, but what the songs would be about, by throwing a rose onto the stage and shouting “smells like a song”. The performers pulled together a storyline that combined an actor’s dream, an evil plastic surgeon and William Shakespeare to fulfil the original audience suggestion of ‘Hot Lips’. It boarded on the bizarre at times due to the audience’s selections of songs, but the undeniably talented performers made it all work and delivered lots of laughable moments.

Musical director Boris Connelly, along with the lighting and stage crew, provided all the atmospheric and actual props the performers desired. Connelly’s music was the perfect backdrop to the antics on stage.

SuperScene and Smells Like a Song is a joyous way to wrap up a weekend and exceptionally good value given the talent and the price of tickets. A show that you could see over and over again.