I knew next to nothing about Drago’s Amazing Bona Fide Freak Show before attending the show, but I was intrigued by its title and minimal show synopsis. Fortunately, Drago’s (Ilan Abrahams) declaration at the beginning of the show that he is here to entertain us and we are here for enjoyment really proves true. 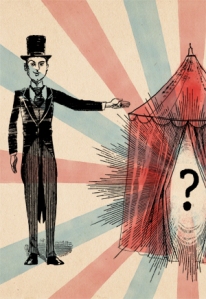 Abrahams has really honed in on showman Drago’s character and personality. The physicality displayed seemed very natural and habitual, and along with his miming, Abrahams has great story-telling abilities and ensures that he always has our attention.

The tatty circus tent designed by Hamish Fletcher and the outfit worn by Abrahams and created by Amaya Vecellio are both well thought out and carefully detailed, down to the dirt marks and holes, further embracing the travelling circus atmosphere.

The lighting played a very important and effective part in Drago’s Amazing Bona Fide Freak Show. A variety of lighting techniques are used including a circus spotlight, torchlights and candlelight, with each eliciting a different emotion or mood from us. Even amongst the low light moments, the shadows bouncing off the walls and flickering within the tent added to the freak show vibe being created.

Despite my enjoyment, I did walk out of the show feeling unsure as to the purpose of the piece. What is it that Abrahams wants us to feel? The stories were enjoyable as were the songs but I felt like there was a message that got lost along the way. I was also puzzled as to the meaning of the special guest and the “big reveal”. I expected a stronger impact especially with all the anticipation for their arrival.

The elements that do work in Drago’s Amazing Bona Fide Freak Show work very well and ensure that it is an hour of definite enjoyment, even if the ultimate meaning of the work does get a little confused.

Drago’s Amazing Bona Fide Freak Show was performed at La Mama as part of its Explorations season which supports works in development.