1000 songs in 60 minutes that The Shuffle Show promises seems like a completely implausible task. I have no idea whether the musical comedy duo of Elena Gabrielle and Grant Busé achieve this monumental task, but even if they don’t, I don’t care, because what they do provide is a witty, energetic musical extravaganza. 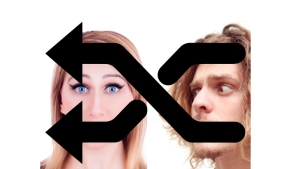 Rather than just sing, and provide a useful, but clichéd, count of all the songs they sing, Gabrielle and Busé merge the idea of a Mac Genius Bar experience and shuffling through an Ipod playlist. As a consequence the show covers a plethora of musical styles and makes some commentary on the familiar experiences of Apple’s highly controlled customer service regime and the domination of Apple devices on the world market.

The playlist choices were unconventional and the resulting musical compilations were so diverse and skilfully constructed that it is far too difficult to pick one favourite moment; I would end up listing the whole show. For Melbournians it might be the ode to Melbourne weather, or for those with more eclectic tastes perhaps the rock and rap medley. Whether it’s big butts or big divas are your thing, the construction of the medleys and their execution was flawless.

If the witty comedic interludes and the extensive songs choices are not enough to entice you, then go for the sublime singing voices of both Gabrielle and Busé. These are two phenomenally talented musicians whose voices I could have continued to listen to well in to the wee hours of the morning. Gabrielle hits all the high notes of some of all the iconic divas, and Busé has a bluesy rock voice that is simply divine.

If you love music, have an assortment of musical tastes, are a little embarrassed by some of the music on your playlists, or are looking for a good laugh, this show is for you. And failing all of that then go for Gabrielle and Busés’ lycra-clad, Apple Store geek dance moves.