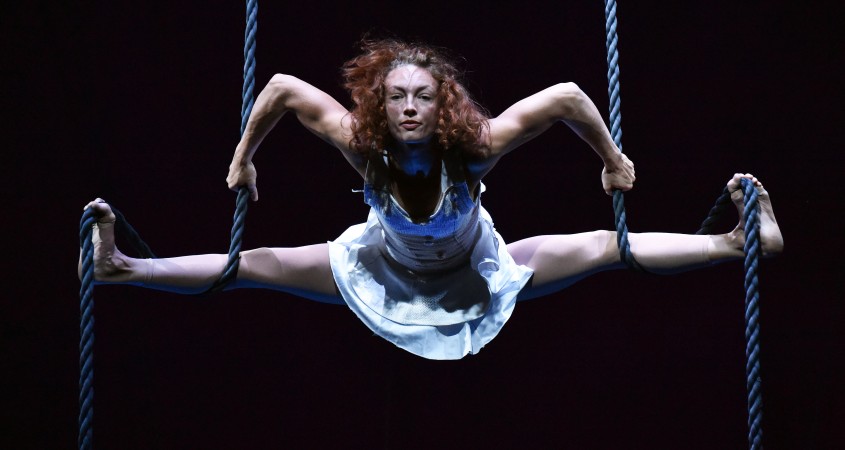 A homage to circus’ most loved qualities

NoFit State Circus has discovered two key ingredients for a fast-paced circus extravaganza: a series of short acts teamed with wistful and poetic imagery. A nostalgic school scenario opens the evening with the cast sitting at antique desks before being hoisted into the air in joyous mayhem. The juxtaposition of the mundane and gravity-defying displays fills the canvas walls as aerial artists, acrobats and clowns take over the classroom.

Lexicon, a title that perhaps tributes the rich vocabulary of circus as developed since Philip Astley’s equestrian-based entertainment of the late 1700s, sees an array of individual numbers come together to form a seamless whole. Staged in a circular ring of a tent that’s nestled amongst the greenery of the Royal Botanic Gardens, Lexicon harks back to circus’ golden age while delivering a contemporary experience complete with a superb live band, open rigging and on-stage costume changes.

Milan-born director, Firenza Guidi has an eye for creating beautiful visuals combining empty space and multiple focal points for maximum effect. Leading performers at the top of their game, Guidi has arranged a straps, slack wire, double ropes, rue cyr, trapeze, foot juggling, hand balancing and unicycle act each separated by a good dose of clowning and group acrobatics. In one instance a fire juggler proves that clowning is in fact serious business, he repeatedly sets himself alight and the audience erupts in laughter before he swiftly juggles a countless number of flaming torches with ease.

Embracing danger, the bizarre, outlandish comedy and vivacious personality, the artists all espouse circus’ most loved qualities by accomplishing reality-bending tricks that spark awe in children and adults alike. Their Edwardian-style steampunk costumes will make you want to throw your work attire in the bin and run away with the circus. Though, based on the talent of the cast only years of training would grant you entry into their ranks despite how easily their stunts seemed to be executed. Lexicon is a playful and joyous ride that not only transcends the mundane but the laws of gravity too, and it’s simply exhilarating.

Lexicon is being performed at the Royal Botanic Gardens Victoria until 21 October as part of the Melbourne International Arts Festival. Tickets can be purchased online.